Upgrade Possibilities Of Windows 10 Explained in this article.

A single Microsoft Most Valuable Professional (MVP) has been answering Windows 10 upgrade questions this week, even when Microsoft won’t.

Windows 10’s arrival is planned by Microsoft in late July, so individuals and organizations contemplating upgrades likely will have many questions at this point. Surprisingly, despite its impending arrival, the company mostly hasn’t answered direct questions from the press. That circumstance isn’t always the case, though. For instance, while Windows 10 pricing information wasn’t published, a Microsoft spokesperson did provide the following estimated retail price details to Neowin, saying that Windows 10 edition prices will be the same as those of Windows 8.1. Here are those prices:

Enterprise edition pricing wasn’t mentioned. Microsoft will have Mobile, Industry and Education editions, too, so those details are yet to come.

While Microsoft has mostly stayed mum on Windows 10 upgrade details, that hasn’t been the case in in a Microsoft community forum page devoted to that topic. In that forum, Microsoft MVP Andre Da Costa has fielded many basic upgrade questions. Of course, Microsoft’s MVP designation is for professionals working outside of Microsoft.

Windows 10 Upgrade Q&A
Here are summarized questions and Da Costa’s answers, which may or may not represent Microsoft’s positions.

Q: Will the free upgrade to “Windows 10 as a service” mean that it will just be free for a year, and then you’ll have to pay for it after that time?
Da Costa said that Windows 10 is not a subscription service and that the free upgrade promotional offer, which is good within a year of Windows 10’s release, will not require payments after that initial one year’s time. This interpretation, while likely true, may or may not conflict with past Microsoft statements. Many reporters heard Microsoft officials say that the free upgrade was just free for a year, but Microsoft seems to have since deleted those kinds of statements from its blogs and transcripts.

What are the upgrade paths to Windows 10?
Da Costa posted an “Upgrade Matrix” clip from a Microsoft WinHEC session indicating which Windows 7 and Windows 8/8.1 versions can move to Windows 10. Essentially, users have to upgrade to Windows 7 Service Pack 1 and Windows 8.1 to get the update for desktop devices. There are few details about a Windows Phone 8/8.1 upgrade to Windows 10 at this point, but Microsoft implied back in May that the phone upgrade would arrive later than the July 29 Windows 10 rollout for PCs and laptops. In a blog post, Gabe Aul, lead of the data and fundamentals team for Microsoft’s Operating Systems Group, implied that users would have to upgrade to Windows Phone 8.1 first to get the Windows 10 update. “For phones, Windows 10 will arrive later this year — both on new devices and also upgrades for existing Windows Phone 8.1 devices,” Aul wrote. “Even though Windows 10 will be arriving for phones later than it does for PCs, the underlying OS code is still the same.”

Will the free Windows 10 upgrade notice be sent to my organization’s end users?
Da Costa commented that “domain joined computers should not be receiving the update at all.” However, eligible individuals or consumers are already seeing a “reservation app” notice. It appears on the system tray side of a Windows 7 desktop, for instance, and looks like this: 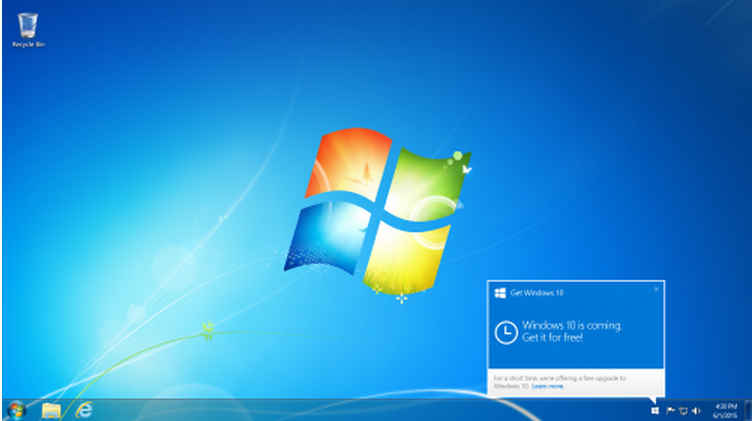 How can the Windows 10 upgrade notice be eliminated from a system?
Da Costa described uninstalling update KB3035583 to do that.

Will domain-joined machines running Windows 7 or Windows 8.1 Pro editions be eligible for the free upgrade if they’re not volume licensed but just run at a small business?
Da Costa said that “they will qualify, but you will have to log into a local Administrator account and initiate the upgrade.” He also clarified in another post that organizations with multiple devices to upgrade would need to establish upgrade reservations for “each of your eligible Windows devices.” Da Costa noted that while that’s “not a suitable procedure … it’s the only option available.”